When we heard about the story behind the story we just knew it had to be shared. One of the books we’ve published in the last month is a fictionalised account of policing in South Shields, Tyneside, in the 1920s, based on the memoirs of a serving policeman. 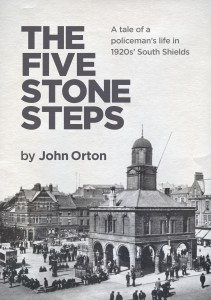 The book, The Five Stone Steps by John Orton, is a highly entertaining account of life in the seaport after the Great War, and John has interwoven stories from his grandmother, with the police memoirs, to produce a very funny set of tales of mischief, love triangles and all sorts of scrapes. Crime was quite low-level in those days, but life was often hard, with men drinking away their wages and women struggling to feed their children.

As well as asking us to produce his book for him, and make it available for sale, John was also clear that he wanted some local marketing, as his main target audience are local readers on Tyneside who will recognise many of the landmarks mentioned in the book. It also helps if you can understand a bit of Geordie!

So, we focused on a handful of local papers, and provided them with the story, photographs of the author, and also wartime photos of the policeman whose memoirs gave rise to the book. The Shields Gazette and the Evening Chronicle both ran extensive pieces, drawing attention to the book, and, most importantly, mentioning where the book was on sale. As a result, the South Shields Library bookshop has just placed its third order for John’s books as they are selling so well. For non-locals the book is also available online as a paperback and ebook.