I’ve touched on marketing in previous posts, and I’m returning to it because many new authors find this the biggest challenge of all. Short of advertising everywhere (do you want to take out a second mortgage?), it can be difficult to reach your target audience, and begin to get your book talked about – and read.

But marketing is an essential part of the publishing process – just as important as it looking good and reading well – you don’t want your book to remain hidden from view.

One of our authors, Calum Bruce, planned his marketing approach whilst he was writing his book. Before the book was published, he set up a website, he talked to many, many people about the book he was writing, he planned a book launch in his home town of Perth, and he contacted his local newspapers, resulting in some media coverage. 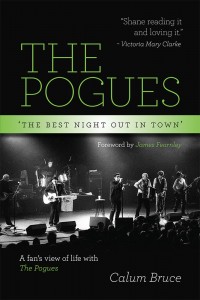 Calum was very clear on the audience he was trying to reach. His book has particular appeal to Pogues fans, and he could connect with them through Facebook and other social media. The book was made available worldwide so he could reach the global fan-base. Whilst Calum was connecting with a niche market, the principles he deployed remain true. He created interest in his book, ahead of its publication; he connected with key people (in his case members of The Pogues who helped with the promotion); and he made it a talking point, thus creating anticipation ahead of the book’s publication. He was off to a flying start.

Getting it right from the start

Calum’s tips include making sure that you find a good fit with your publisher – you are about to embark on an exciting journey, so it is vital to choose the right person/people to support you – and having a strong cover, that attracts attention and gets people talking about your book.

He says: “From the very start, I was comfortable working with some really genuine people who believed in my writing. They delivered in every way, advising me throughout superbly, and even managed to complete my project to a tight time schedule. I’m both thrilled and delighted. The end result is simply that my book is doing well.”

Calum made sure he had plenty of copies of his book to take to The Pogues’ pre-Christmas gigs and flyers to hand out for those who prefer to do their shopping online. Within a month he had almost sold out of his initial print run, and his online sales were equally positive – a brilliant start. Oh, and garnering multiple 5-star reviews doesn’t do any harm either. His book is a great read, and he deserves the success.