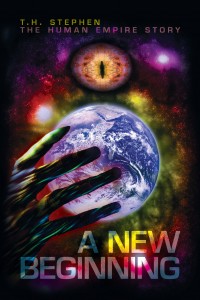 This is the first book in an exciting new science fiction trilogy, The Human Empire Story. Set in the late 22nd century, the world is recovering from a catastrophic event that has broken the US and the Western world. And a new empire has accidentally awoken an ancient evil with an intent to conquer Earth and enslave its population. Can Captain Magnus Tempest, commander of the United Nations Fleet Ship the King Canute, save Earth from an evil that is out of this world?

“After I had wrote the draft for my book I did some research on how best to get my book published. Looking at traditional versus self-publishing I did some research; a big bonus for me was that self-publishing gave me 100% control of my book and its direction in regard to how I wanted to market and promote it. It also meant that I wasn’t tied into a contract. I looked through the web and noticed that UK Book Publishing had some of the best reviews and examples of self-publishing. I gave them a call and spoke to their team; from then I had no doubts that this company was perfect for my venture. From the initial call to the finished product; they talked me through all the steps. From proof reading, editing, to cover design and getting it up on Amazon - the team talked me through every stage via phone and email. The service was faultless; I found the team professional, friendly and helpful, but most of all extremely approachable which I think is very important. They went above and beyond to help me reach my goal, and I felt that they wanted to be sincerely involved with my vision. I now have an amazing book and I don't think it would have looked as good if I had gone with a traditional publisher. So I say a big Thank You to Jay, Ruth, Judith and Dan, and to the rest of the team. ”
— T H Stephen

Buy it now Buy on Amazon