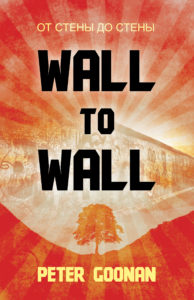 A tense thriller with lighter moments, and beautifully written, Peter’s first book is set in the not too distant future:

Britain is out of Europe; Scotland has become independent following a second referendum; and Russian forces have just marched over the Latvian border and occupied the cities of Rezekne and Daugavpils, testing NATO’s response.

Retired army captain Simon Shaw unwittingly finds himself at the forefront of the Resistance Movement, in the Scottish border region, as England quickly becomes the next target for Russia’s expansionist leaders. Simon needs to draw on all the skills honed whilst serving in Berlin before the Wall came down, to fight the immediate threat being posed to a weakened, divided country.

“I began writing this, my first book, well into my retirement years almost by accident and had no idea what, if anything, to do with it. Also by accident, I discovered UK Book Publishing. I discovered that the company is in Northumberland, where my book’s action takes place. I then discovered that Jay Thompson actually lives in the house in which I was born! How could I look elsewhere and how glad I am that I didn’t.

My book has just been published and, although I haven’t met either Jay or Ruth, they seem almost like friends. Nothing has been too much trouble, despite my no-doubt amateurish pestering. Jay’s artwork is just what I would have wished and all stages up to and including getting my book onto Amazon were handled with great efficiency. I have spent many years working with languages, including my own - English, and felt I didn’t need a proof reader. How fortunate I was to rethink. I found that proof-reading my own text for the fourth time – how boring that can be – was still turning up errors and I needed Ruth – who turned up still more and saved me from three major howlers, including an army captain who seemed to be eight years old!

Calls and emails were always answered swiftly and with warmth and courtesy.

Ruth and Jay and the rest of the team actually contrived to turn a venture which I had approached with apprehension into a pleasure.”
— Peter Goonan