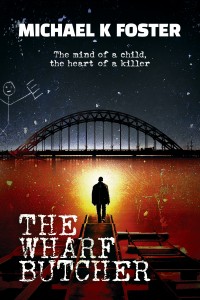 Mike came to us initially for editing services. He had submitted his thriller to a literary agent, who liked it but advised him to rewrite and rework a number of aspects. After taking the edited manuscript back to the agent, Mike then decided to self publish his novel with us, so we designed a cover and set the book up for sale through print on demand.  The Wharf Butcher is a fast-paced thriller set on Tyneside, that pits the combined forces of a criminal profiler and highly ranked detective against a killer with the mind of a child. Can they get inside his head and stop him in his tracks?

“Judging from the feedback, UK Book Publishing has done a first rate professional job on my first novel – The Wharf Butcher. From start to finish, everyone on the team has been extremely helpful and supportive towards me throughout. Jay Thompson produced a stunning design cover, and Ruth Lunn proved to be a meticulous and helpful editor. It will be a privilege to work with them again.”
— Michael K Foster

Buy it now Buy on Amazon